If you’re planning your wedding and have decided to have a cake, some of the questions running through your mind may be “When should we cut the cake?” or “What’s the best way to cut a wedding cake?” You’re probably not wondering how to prevent guests from slicing into your cake before you do. Maybe you should – a woman just went viral on TikTok for cutting a wedding cake before the bride and groom.

Yes, you read that right. In a 17-second TikTok video filmed by another wedding guest, the bride’s friend nonchalantly walks up to the wedding cake, cuts the first slice, licks her finger, then takes more icing off the spatula with her finger and licks it again.

“Ignoring the brownie table and confidentially cutting myself a slice of HER WEDDING CAKE thinking uh-oh! They forgot to serve it to everyone else!” she wrote.” She probably meant “confidently” – because there was nothing confidential about the ordeal. The video was viewed over 24 million times and sparked a rather entertaining debate.

For clarification, the woman helped herself to the top tier of the cake, which is traditionally set aside for the bride and groom to enjoy on their one-year anniversary. It was not meant to be served to guests that night.

For clarification, the woman helped herself to the top tier of the cake, which is traditionally set aside for the bride and groom to enjoy on their one-year anniversary. It was not meant to be served to guests that night.

According to The Knot, this wedding tradition dates back to 19th century England, when couples would save the top tier of their cake for their first child’s christening. Granted, people were expected to have babies within a year back then – and fruit cake was served at weddings, which had a longer shelf life. Modern couples still embrace the practice by freezing the top tier of their cake for their one-year anniversary. The Knot 2021 Trends and Traditions Study found that 48% of couples did so or were planning to do so.

This is information that the wedding guest in the viral TikTok video was clearly unaware of. To top it all off, there was another controversial aspect to the whole thing, which some people were quick to point out: The finger-licking move. “Omg nooo the licking the finger then touching the serving utensil,” wrote one commenter. “

Offensive, Unhygienic, Hilarious – Or All of The Above?

“This made me angry and it’s not my wedding,” wrote one TikTok user. “This is literally the worst thing I’ve ever seen. Uninvited to my life events moving forward,” added another. Some commenters even went as far as saying that they would end a friendship over this.

What takes the cake is the fact that someone filmed the incident instead of stepping in. Several TikTok users chimed in that someone should have stopped the woman from cutting through the cake and wondered why the person behind the camera didn’t intervene.

Other TikTokers were more lenient with the cake-cutting offender and didn’t understand the big deal. “These comments are not it omg this is actually so funny like if my friend did this at my wedding I would find it absolutely hilarious,” wrote someone. “I would laugh if one of my friends did this at my wedding,” agreed someone else.

Opinions were basically split between “it’s just a cake” and “I can’t believe she did this,” with the occasional germaphobe chiming in.

What The Bride Had To Say

At the end of the day, it was an honest mistake. Perhaps the guest should have known better. But what matters the most is what the bride had to say: “As the bride whose cake this is – SHE IS FORMALLY FORGIVEN AND HAS LEARNED HER LESSON IN WEDDING ETIQUETTE,” she said.

As for the guilty guest, she wrote “I know better now. I hate myself!” You can bet she’ll never make that mistake again. 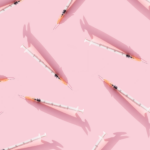 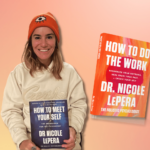