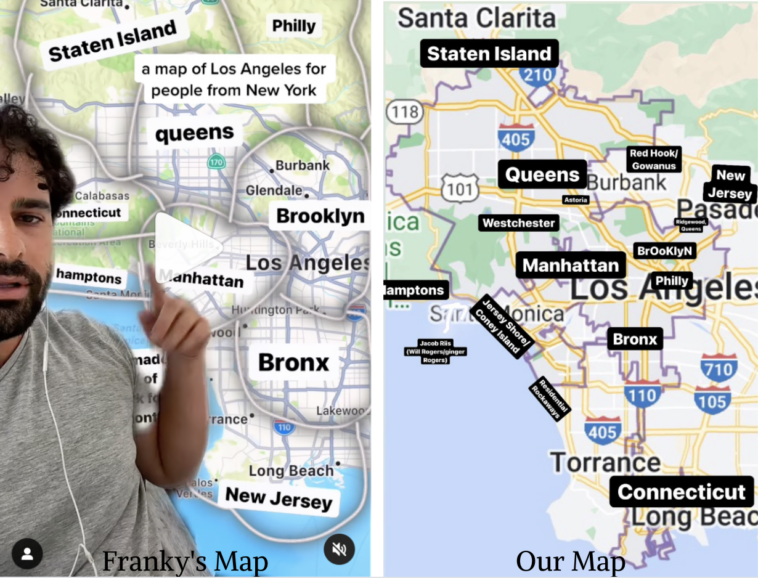 TikTok creator Franky Burns went viral with his hot take on a map of Los Angeles as compared to NYC locations.

The map gained so much traction it was also covered by news outlets.

In my opinion, as a bicoastal girl, I don’t think the map is entirely correct. He’s definitely speaking to someone out there. But this got me thinking: could I make a better map? Yes. And I did it, below.

Why I’m The New York and Los Angeles Expert

I know, this doesn’t exactly sound like a big PLUS but hear me out. I’d like to flip that script and say it’s the starter pack to being a Big Apple King — it smells just as horrible and has a public transit system that is also technically pretty impressive but somehow completely hated.

2. I went to college at NYU

Listen, I get it. Saying I went to NYU is more annoying than if I said I went to Harvard. But going to college in the city was truly a blast. As NYU loved to say, the city was our campus.

3. I lived in Brooklyn for 5 years

After college, I joined the NYU to Brooklyn pipeline and moved directly to what was then considered Bushwick and has now, in a gentrification rebrand, become East Williamsburg. I stayed in the same 3br apartment for all five years with one consistent roommate and a Boho Days slew of thirds.

4. I’ve been named the most Bicoastal girl in my year

In 2021 and 2022 I skipped NYC winter and lived in LA for a few months. For two years I split my time almost evenly between the two cities. Now, I live in LA and go back to NYC to visit family and friends for extended trips.

This one is simple… I live in LA now. My combined time in LA amounts to approximately one full year. So that makes me an expert.

My Version of The Map

All to say, Franky’s POV is a bit Manhattan centralized. And I am here to give you the “I’ve lived in Manhattan AND on the other side of BOTH rivers” POV. This is the map I created.

As you can see, I do agree with a lot of what Franky put out there in his TikTok. However, I went into some more specifics and had some drastic shifts. It’s all about perspective people.

And that’s that. What do you think? 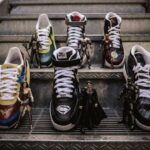 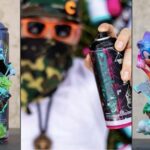